You gotta know when to roast 'em... 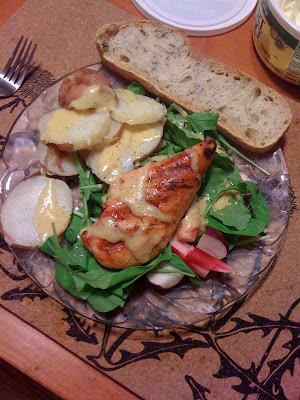 Before we get down to business, I present (above) the evidence of what was done with the CSA arugula. This salad is based on this recipe, but I've done it a few times without the rotisserie chicken. I threw the CSA radishes on the plate for some color and completely forgot the parmesan, but it was pretty good despite all that. This entree also co-starred the bread I made with the lemon and rosemary, which didn't come out that well because I put the oven at 350 instead of 450 and didn't realize it until 45 minutes later.

I used the vitamin green and the tatsoi for this salad, which I've been eating all week for lunch. And I've realized something after eating it for a couple days now. Vitamin green is yucky. I've never been a fan of those greens that have strong flavors, like mustards and collards. We can now add Vitamin Green to that list. Much like collards, I think it could only taste good if it was boiled in mounds and mounds of some sort of highly salted animal parts. We're bound to get it again, in which case, I will have ham hocks at the ready.

The saving grace of lunch today was the fresh watermelon and feta salad (with a dash of pepper) that I packed for an afternoon snack but ended up scarfing down after eating 3/4 of the evil vitamin green salad.

Tonight, I stared at one kohlrabi, three turnips, some asparagus (not CSA), an onion, some carrots, and two fennel bulbs and felt a bit defeated. The greens on the carrots and the kohlrabi were looking pretty pathetic so I knew these veggies had little time left. I decided it was time for a mercy killing, so I chopped them all up, threw them in a roasting pan and coated with olive oil, salt, and pepper. They will join some grilled-up bratwurst for a simple dinner and I will only have the pea shoots to deal with...
Posted by Laura at 4:26 PM