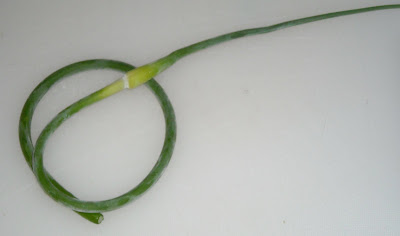 What a busy week! Whenever the hubby is a way, I am always balancing more household duties along with the plethora of work and community-related tasks that I pile on voluntarily. Cooking dinner almost felt more like a chore than an adventure over the last couple of days, but I did get some enjoyment out of figuring out ways to use some CSA items for meals that could be made on the quick.

The garlic scapes have been calling me since last Friday, and I finally managed to use them yesterday in a big batch of skin-on mashed potatoes. I chopped them very finely and threw them in raw, but I think the next time I'll saute them first. It went well with a nice steak on the grill. For a veggie, I used the kohlrabi, along with a bag of Trader Joe's shredded carrots in this salad. I know I mixed some typically American fare with a salad that is Asian-inspired, but I loved every bite. Kohlrabi is a really neat vegetable. It has the exterior qualities of a cabbage, and a similar taste, but with more buttery undertones.

Tonight, I came home from a community meeting that lasted twice as long as was necessary (as usual), and I wanted to eat something quickly so I could do some work on a knitting project. I have to admit that I considered ordering chinese and laughing hatefully at the kale that was waiting patiently in the crisper drawer. But I relented. I took some Trader Joe's brown rice fusili and threw that into boiling water. While it was cooking, I removed the stems from the kale and cut it into ribbons, sliced up some sundried tomatoes, and minced two garlic cloves. I heated olive oil in a dutch oven and put the garlic in to cook. Then I threw in the kale and a can of drained cannellini beans, and threw on the lid. When the kale was good and wilted, I added the cooked pasta, a little more olive oil, a squirt of lemon juice, salt, pepper, and a little bit of the water that was used to cook the pasta. I let the whole pot simmer for just a couple minutes and dished it into a bowl before topping it with a shake of parmesan. Not bad at all.

I have some greens and a couple radishes left, along with the bok choy and broccoli. I think I have some plans for those two lovelies, already...
Posted by Laura at 8:38 PM