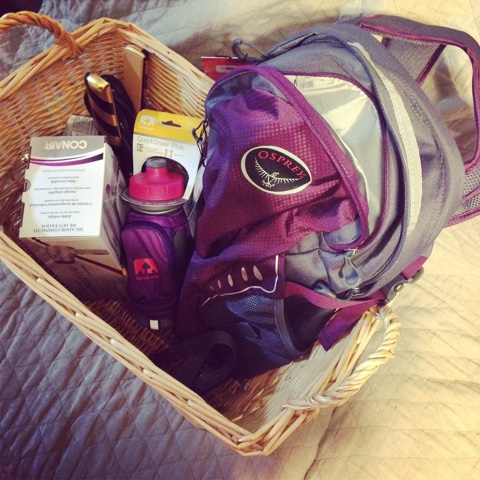 So, in a nutshell: I did it! (Cue victory dance.)  Here's a brief recap of the experience:
- My route: I ran 3 miles from my starting point to just a few blocks away from my office, mostly by way of large main roads that cross the city.
- What went to the office on Monday: That basket up there, the hair dryer, the flat iron, a jar of course ground coffee and a personal french press to keep up my cold brew addiction, a container of coconut creamer for said coffee, shampoo, conditioner, body wash, a towel, and a bag with three work outfits plus undergarments.
- What I took with me on the run: That backpack up there plus the hand held water bottle, ear phones, iphone arm band, sunglasses, work shoes, lunch, ipad, iphone wallet, keys, and the hair brush I forgot to bring in on Monday.
- Things I didn't anticipate: The weight of the backpack slowed me down a bit.  Even as the palest person I know I forgot to put on sunscreen.  The backpack created new chafing spots that I didn't even know were possible.  And so. many. stop. lights.
- What I loved about it: I got a lot of high fives - center city runners are so nice! Even though it was still a hot and humid run, the temperature was way more tolerable than during midday runs.  And the best part? I was done with my day's workout before I even started my work day!
- What I will tweak: My next run is supposed to be 4.5 miles so my route is going to have to be lengthened, but I also want to find a way to avoid the big streets that are just light after light after light.  I'm also going to try to pack less in the bag - being weighted down by a tiny backpack should not be a factor. And also SUNSCREEN.
- Overall: I'm so glad I did this.  It felt like I was finally making it work with the run training.  I'm hoping to fit in two more run commutes this week, and after looking at my schedule, I think one of them might be a reverse commute after work.
- What I need from you: My Rhapsody playlists need some serious updating.  What's your favorite running song?
Posted by Laura at 6:24 PM No comments: 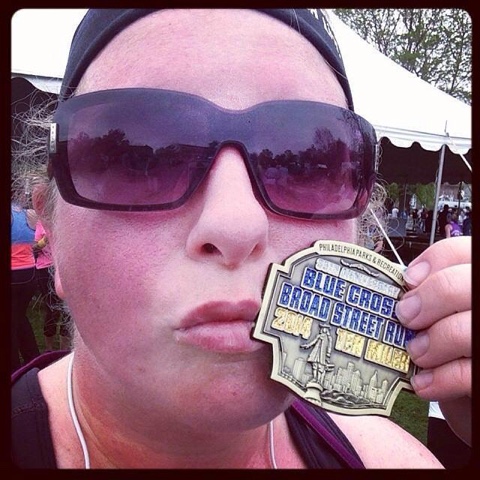 This is the face I want to recreate at the Philadelphia Marathon in November.  It's the face of victory.  I wasn't the fastest Broad Street runner by far, but I finished.  And I didn't finish last, so there's that.  I trained hard for this race and I mean HARD.  I ran 3-4 times a week, I cross trained with spinning and BodyPump classes, and I ate like a freakin' champ.  But since then, I've made two attempts to train for a half marathon - the next logical step for a Type A weirdo who can't do anything if she's not outdoing herself - and both have failed.  The reasons behind my failures were perfectly understandable so I'm not beating myself up over that.  However, I am agonizing at how lax my training has been on this most recent attempt.  I just can't seem to find the time to run. I know half the people who read this will say I'm not trying hard enough and the other half will say I shouldn't be so tough on myself.  I've had to accept that I'm just not going to be that runner who gets up before dawn to go for daybreak runs and I'm too much of a workaholic to break midday to do it during lunch; evening runs are tough with two little kiddos to get to bed.  I'm just trying to buck up and figure it out.  I'm thinking the only way to guarantee that I get in a run is to try run commuting.  It takes a good deal of prep, though, so I thought I'd share my plan and update later on how it worked.
Step One: Gear Up
This plan requires a few accessories to help make it happen.  First, I need to be able to shower when I get to work, so I'll be setting up a basket in my office that has shampoo, conditioner, body wash, a brush, a hair dryer, and a flat iron (luckily I already have a spare Chi).  For the runs, I purchased an Osprey Daylite running backpack to carry the few things that I need to have each day.  I chose it because it has a waist strap that will keep it in place while I run, and it can also hold a hydration pack for my long weekend runs.  I also got a Nathan Quick Draw hand-held water bottle for the weekday runs since I won't have the luxury of stopping for water along the way - these runs all have to happen within an hour.
Step Two: Prep
My current running schedule calls for three weekday runs and a long run over the weekend.  My plan is to come in to work on Monday with three extra work outfits and shoes, a small laundry bag, and a clean towel.  The dirty workout clothes and towel will go home with me on Fridays.  This way, all I need to carry in the backpack is my wallet, iPad, and lunch.
Step Three: The Route
My weekday runs range from 3 miles to 5 miles and it's a little over 3 to get from my starting point to the office.  I will run straight there on my short run days, but the 5 milers will require some creativity.  My plan is to try running across the city, then up Kelly Drive, past the boathouses and back again in order to tack on some mileage.  There are endless possibilities, though, and I'll need to switch up the route often in order to stay motivated.  (I'm saving the Rocky Steps for when I really need a boost.)
Step Four: Yeah, that motivation thing
I am not gonna lie - motivation has certainly been a factor in this slow start.  Between work, family, and other stuff, there are days when I just say, "Well, I don't want to run today."  And on some of those days, I run anyway, only to remember the glorious high that comes at the end of the run.  Runners' high is not a myth, y'all.  When I slow to a strolling cool-down at the end of a run, I feel like a total warrior.  I haven't been feeling that way very much in my daily life, so a reminder of my badassery is very much in order.
So there it is.  My plan to become a three-day-a-week run commuter.  Think I got a shot?
Posted by Laura at 6:59 PM No comments: 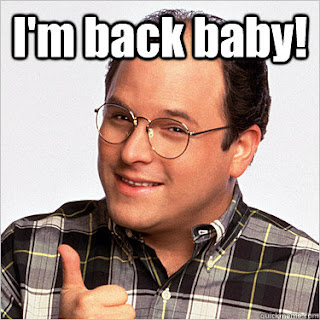 Has it really been two and a half years since I posted anything here?  I've been feeling inspired lately and thought maybe I should try to write a weekly post.  Ideally, I'd like to buy a URL, get a custom design, and really try to make something of this, but baby steps.

1) I ended up losing a total of about 50 lbs and have plateaued for the last year and a half or so.  One of my goals in starting up this writing again is to get back on that train.

2) In the fall of 2013, I decided to train for and run a 5K for cervical cancer in memory of my mother.  I figured I'd stop at 3.1.  Well that wasn't good enough so I trained for the 2014 Broad Street Run, a popular 10-miler in Philly.  Finished it.  Since then I've tried to train twice for a half marathon but was unsuccessful due to other updates that will reveal themselves below.  I'm now training for the third time and determined to git'er done.  I have a loose goal of completing a sprint tri by the time I'm 40 but that requires more weight loss.  See where I'm going here?

3) Also in the fall of 2013, my beautiful niece M was born in California.  Due to a variety of circumstances, she ended up in foster care just days after birth and we were asked if we would consider taking her.  We never hesitated for a second.  My husband and I began the arduous process of flying one of us to the west coast once a month for visits.  We opened our home to various agencies to qualify us as her foster parents.  Finally, after nine long months, M came to live with us in Philadelphia.  She is now almost two and we are working to adopt her.  She and her "big brother" C (now 4) are our awesome little crew and we couldn't be happier.  But training with that sort of schedule was tough.  So attempt #1 for a half marathon was out of the question.

4) This past winter I was on half-marathon attempt #2 when I came down with what I thought was a horrible cold that I'd caught from the kids.  But when my entire right shin swelled up and I became delirious, I knew it was more.  I landed in the hospital for four days with a case of cellulitis that was a combo of a strep infection gone wild and something that got into my system through - wait for it - a blister I got from running.  My doc and I still suspect that there might be some sort of auto-immune issue at play, but nothing major.  I have adjusted my training to be more yoga and running focused so that I'm not potentially causing adrenal fatigue. Nonetheless, the recovery from that stint was long and attempt #2 was down the drain.

5) We're finally building our new house!  It took nearly three years, but we are almost done with the money stuff and a builder is waiting to get to work.

6) Due to an awesome promotion at work, I'm still traveling but with more long distance, so I am working to incorporate healthy eating and exercise while I'm on the road.

That's all gotta be good for a few posts, right?