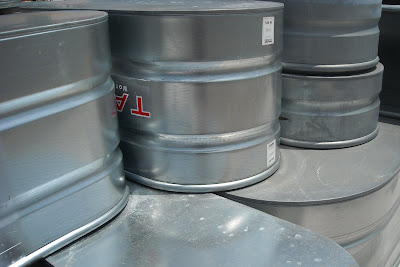 To my handful of readers:I hope you won't mind if I also write about my gardening triumphs and mishaps. I figure it's related enough to this blog's true purpose, since I do grow things that I eat.

We drove out to Berlin, NJ, today. I was on a mission to find galvanized feeding troughs to use as raised beds in our garden, after reading this. I'm think that my hubby secretly loves my obsession with Apartment Therapy, since it almost always leads to some sort of weekend adventure that resembles a scavenger hunt, but with more irony and cold-hearted laughter. We hit the Agway in Berlin, first. While Agway's website lists steel "stock tanks," this particular store only carried the plastic variety. We decided to go to our second option, the Tractor Supply Co. which is further out in Sicklerville, but pit-stopped at the Berlin Farmers Market first.

Let me digress for a second and give this piece of advice. If anyone ever tells you that the Berlin Farmers Market is awesome, just turn around and walk away. The website says that it was started as a livestock and produce auction, but now it's nothing more than a junk parade. I'm not talking about antiques, because that's cool...I'm talking about real, live JUNK. New junk. The farmers market looked cool, but I was so nauseated by the smell of the indoor market that I couldn't even think about going over to look at produce. Blech. For friends from my hometown, it was like the Union Market...on crack.

So back to the real goal. We made it out to the Tractor Supply Co and found exactly what we were looking for. You can see what I'm talking about in the picture above. They are now sitting on bricks in the backyard, drainage holes drilled, half-filled with soil. We will be heading out to get some more compost, which I've found can be acquired for free at a startling number of places in Philly. One container will house tomatoes, exclusively. We purchased at least four varieties but made sure to get a bunch of romas for sauce-making! The other will house a variety of other veggies including peppers, pickle cucumbers, and eggplant. I'll try to post some pictures of the finished product once the yard is presentable.
Posted by Laura at 3:12 PM