Charmed, I'm sure. No, seriously! 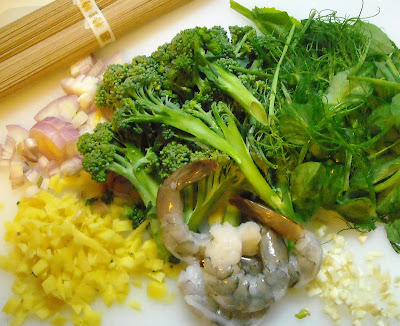 I imagine that the broccoli and pea shoots felt almost as victorious as Betty White must be feeling, today. They were the last ones standing, after all. I came home from work, and did a quick stir-fry with some shrimp, ginger (yeah, lots of it too!), garlic, and a shallot. The sauce was a clumsy mix of sesame oil, olive oil, and soy sauce, and the whole thing was thrown on top of buckwheat noodles. Not glamorous, but it'll do. Bet that's what Betty said.

As the shrimp hit the oil in the wok, I thought to check the date on some concert tickets that were stuck behind a magnet on the fridge. They were for our favorite band so I'd purchased them a while ago, but thought the date was far off. And of course, they were for tonight! I rushed the hubby home from work and out the door and off we went. The show was amazing, despite the fact that the joint had no A/C. They played their entire new-and-not-yet-released album plus a half-set of old stuff...including a song we used in our wedding ceremony. Love them.

That poor stirfry is waiting for me to eat it, though. Lunch tomorrow. The hubby ate his portion and said it was delicious.

In other news, I got my first social invite related to this blog thing. A friend told a friend who also spends his week pondering what to do with CSA items, and he was psyched to have some camaraderie. And I'm psyched to chat about this stuff with someone other than the man I live with who says he likes everything I cook. I'm totally warning this dude about vitamin greens, though.

Week 2 begins tomorrow. It's funny to me how nervous but also excited I am about getting tomorrow's share. I keep imagining what items from this week I'd like to get again, and guessing at what the new items could be. Could this be the new Christmas Eve for hipsters? Just a thought...
Posted by Laura at 8:58 PM