An Ode to Sorrel 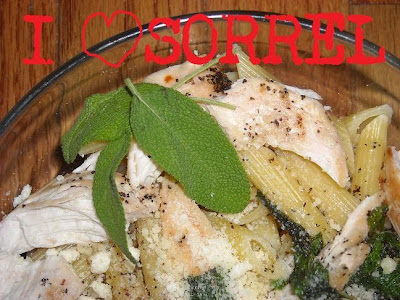 OMG. STFU! I love sorrel so much that I've resorted to using pre-teen txt speak to express my excitement. I said in my Week #2 post that I was excited to get to cook with sorrel for the first time, but I had no idea that it would be this great.

The bunch that I got in this week's CSA take-home was about a handful. Technically, it went quite a long way even if I used all of it in one night's worth of cooking. I did a little internet research and found that it is most loved in the following three contexts: 1) raw in salads, 2) sauteed with butter and poured over noodles (or in a more elaborate cream sauce that can be used for pasta or salmon - too rich for me), or 3) in quiches with goat cheese. I also found a bunch of recipes for sorrel pesto, but I'm still working through last year's frozen supply of basil pesto, so I passed on that.

I walked almost all the way home (from University City to Kenzo), last night. It was too beautiful outside to exercise in a boring ol' gym. But by the time I got home, walked the dog, fed cats, and watered the newly planted back yard garden, I was HUNGRY. I needed something fast. I had two chicken breasts thawed, so I threw those on the grill to cook. I boiled some penne pasta, too. I took a small sautee pan and threw some butter in to melt on low heat. Then, I broke up about 7 sorrel leaves into smaller pieces and threw them in the pan to simmer. Once everything was smelling good, I tossed that on top of a bowl of drained pasta, tore up a chicken breast, and sprinkled a little parmesan on top. It's one step above what most parents probably feed their toddlers on any given night, but that one step makes a difference! The sorrel stood out but had the perfect flavor with hints of lemon-y tang and a sort of smooth spice. Even the pieces that had gotten a little crispy in the pan were awesome.

I also made a quick salad with some of the CSA greens and a couple radishes. Just to see how it would taste raw, I tore up three sorrel leaves and tossed them in the salad. Wow! The flavor was bold and fresh and those three little leaves went a very long way.

After savoring this easy and tasty meal, I got to work on a quiche. Last week's leek and feta quiche was a hit and made it very easy for me to take breakfast to work. The recipe I found for that first quiche suggested using puff pastry sheets for a crust instead of a pre-made crust. I must admit, it's pretty tasty. I went with that again for the sorrel quiche and based my recipe on what I did for the leek quiche. First, I put the puff pastry sheet into a shallow quiche pan and stretched it over the edges a bit. Then, I took about 6 oz of goat cheese and crumbled it all over the bottom of the quiche. On top of that, I added all of the rest of the sorrel, as well as the CSA scallion, both roughly chopped. Next, I took three eggs and beat them with about a cup of milk, 1/4 tsp of salt, and some pepper, and poured it in. I baked for 40 minutes at 375, during which the heavenly smell of cooking sorrel filled the first floor of my house.

I ate my first piece for breakfast, today, and it was what inspired the title of this post. If I could write a love song to sorrel, I would. (But I don't think anyone wants to see me try to write poetry...let alone sing it.) If you see a person digging in the herb bucket at this week's pickup, frantically muttering about needing more sorrel, it's probably me.
Posted by Laura at 7:27 AM