Never too much of a good thing 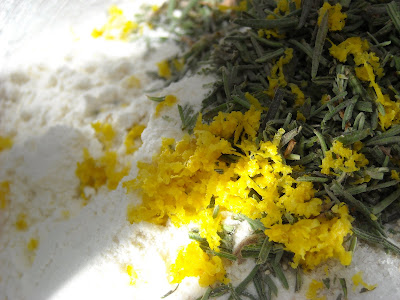 I never have a hard time figuring out how to use rosemary because it's my favorite herb, but I chopped a bunch of the rosemary from this week's CSA share and tossed it into my weekly no-knead bread batch, along with some lemon zest. I also juiced the lemon and added that to the water requirement for the bread dough. Fresh rosemary is probably my favorite scent of all time. I'm a savory foods girl, and rosemary lends itself to so many savory dishes.

Lemons. There's another thing that is very rarely local to Pennsylvania that I buy by the half-dozen on a regular basis. I slice them and throw the rounds on top of fish or chicken that's going into the broiler (or on the grill). I add zest or juice to a variety of recipes for a little bit of tang. Lemons are one of those things I won't give up for the eating local movement. Someday I will have a heated greenhouse in which I will have my own lemon tree. Mark my words.

The locally grown strawberries and rhubarb from Wegman's are indeed in the oven right now, as part of a crisp, the recipe for which can be found here. I didn't have any sugar in the raw, so I used brown sugar for that part of the recipe.