Dealin' with "the sugah" 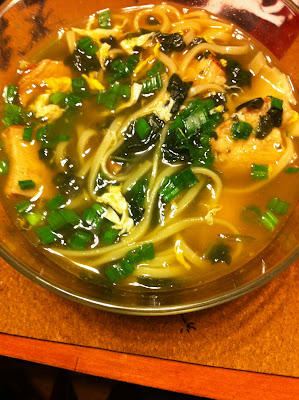 So I failed my glucose screening, last week, and have been ordered to undergo the big 3-hour glucose test that will determine if I have gestational diabetes. I don't underestimate the seriousness of such a condition, but I'm okay with the idea that I'll have to eat higher protein/lower carb meals, drink even more water than I already do, and walk for exercise every day. I don't believe that my current diet is unhealthy, but I definitely kept a tighter reign on what I ate before I got pregnant. Since I got the news that I failed the screening, I've implemented a higher protein regimen, and I've also been trying to get some extra calcium and folic acid, since both of those nutrients are increasingly important now as my boy grows strong bones and a healthy nervous system.

From what I've read, GD meals don't have to be NO carb, but there does need to be a good dose of protein to balance it out. A couple weeks ago, I attempted to make an asian soup with buckwheat noodles and these delicious all natural chicken and cilantro wontons from Costco, but it came out sort of bland. The broth needed some additions and there needed to be more of a variety of ingredients than just the wontons and the noodles. So I tried again tonight, with the idea of adding protein and folic acid to the meal to make it GD and baby growth friendly. I started off again with chicken stock, but this time I added garlic and onion powders, soy sauce, and a touch of sesame oil. The resulting flavor was lovely and smelled great. As the broth came to a boil, I dropped in a couple eggs and quickly broke them up, egg-drop-soup-style. I broiled some lean pork chops from the freezer and chopped them up to add them to the soup, so between that and the eggs, the protein element was complete. I added a few wontons (but less than last time), some organic soba noodles, and the final touch - a bunch of frozen spinach. I threw a sprinkle of chopped scallion on each bowl after serving.

The result was a vast improvement over the first attempt. M added sriracha which was probably a nice touch. Next time, I might experiment a little more with the broth, but for the most part, I'd say tonight was a GD/folic acid success! (Plus it took a total of 30 minutes to make from start to finish.)
Posted by Laura at 8:02 PM