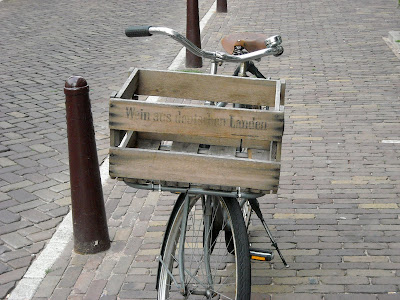 We arrived yesterday and have spent our almost-two days wandering around, using the hotel as home base and a place to catch quick naps in order to catch up on the sleep we lost on the overnight flight. We've tried to dedicate ourselves to using the public transportation as much as possible and it's worked out rather well. The tram system here is phenomenal and a great way to see the city if you get tired of walking.

Hunger was our main concern when we got to our hotel, yesterday. It was mid-morning but we were certainly ready for a lunch. Our hotel suggested the cafe right across the street. Cafe Kale didn't disappoint! We saw bitterballen on the menu and immediately ordered it as a starter. It came to us fresh from the fryer as is evidenced by the still-tender roof of my mouth. But my goodness, was it good. M. described it as "deep fried gravy," which doesn't do it justice but does accurately describe the sinfulness of it. We followed up with some beer and a couple of sandwiches. I had a Beemster cheese and salsa sandwich which was notable for the smoky deliciousness of the flavored gouda that is popular here, and M. had a parma ham, mozz, and salsa sammy. Both filled us up so we could take a quick nap before heading out to explore.

We woke up hungry and headed off in search of a Steakhouse, which is a popular restaurant type in the city. Our Lonely Planet guidebook suggested Steakhouse Piet de Leeuw and we found it on a little side street off of a main one. It felt like a hidden gem, and proved itself to be as we appeared to be some of the few non-Dutch that came for dinner. The steaks were perfectly cooked, and came with a "salad" (more like a slaw - not really my thing due to all the mayo) and frites. When I had a little trouble with the herring app (herring is the national fish here) that we ordered, the surly-but hilarious waiter brought us two little samples of smoked eel that ended up being quite tasty! The meal ended with a shared house-made chocolate mousse that was only slightly upstaged by the homemade whipped cream that came with it. Even with the experimental side-step of the herring, the meal was awesome.

To walk off the mousse, we strolled around the central canal district, going through and around the Red Light District. We knew we "had to see it," but I doubt I will consider it the highlight of our journey. A quick drink in a brown cafe, served by the most bad-ass female bartender I think I'll ever see here, ended the night.

Our hotel has a free breakfast and we enjoyed that this morning. The spread was more extensive than the pastries and coffee we were expecting. There were plates of meats and cheeses, fresh rolls, hard-boiled eggs, tiny tubes of liverwurst (best I've ever tasted) and other assorted goodies. We ate a small meal that still felt hearty. So far, today, we have visited the Anne Frank House (sobering but very well done), walked around the shops in Jordaan (M. purchased the world cup gear he was craving), eaten the delicious frites of the Wil Graanstra Fritehuis in Westerkerk Square, and experienced the dual beauty and madness that is the Albert Cuypmarkt.

It is dinner-time here, which means I must go out and forage for more blog material, of course. My first impressions of the city are that it is beautiful; the weather is as close to perfect as one can get; that Philly could learn alot from the coexistence of public transport, bike riders, and car drivers; and that the matter-of-fact sarcasm of the wonderfully friendly locals is something I could really enjoy on a permanent basis.
Posted by Laura at 9:00 AM