Do it for America 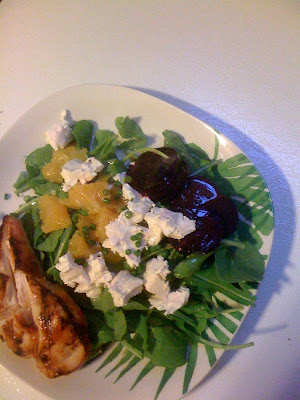 That's tonight's dinner up there. Arugula is seriously the best salad green ever. It has a little bit of crunch but without feeling watery and it's sooooo tangy. I boiled the beets, peeled and sliced them, and then placed them atop the arugula along with some orange pieces, goat cheese, chopped garlic scape, chopped scallion, and a freshly grilled chicken breast. The dressing was an easy combo of white wine vinegar, olive oil, dried mustard, salt, and pepper. Simple.

While I was waiting for beets and chicken to cook, I made this bread and butter pickles recipe with the pickling cucumbers. I halved it since I only had four cukes but it came out just fine. Okay, they were better than fine. I want to save them for a bbq we're going to this weekend, but I don't know if I'll be able to resist them for that long.

Tomorrow, I envision the rest of the CSA items (fennel, stir fry mix, and basil) in a stir fry with some shrimp or scallops, laid over some quinoa. Sounds good, eh?

And it's America's birthday, this weekend! We've been invited to two bbqs and I honestly have too many things that I want to make for our contribution to the festivities. We will definitely take ingredients for dark'n'stormies (rum from Barbados, ginger beer, and limes), as well as the pickles. But I've been jonesing for some of the slow cooker pulled pork and homemade bbq sauce that I made a couple months back, and I'd really like to use the peaches I canned last summer to make a nice crumble. But then there's the awesome double mustard potato salad recipe from "How to Cook Everything." That book was seriously the greatest gift my brother ever gave me, and the potato salad is one of its finest moments. Maybe I'll just honor our forefathers by making it all, and then I'll sit back with a dark'n'stormy while I happily watch my friends enjoy my food. I think Ben Franklin would appreciate that.
Posted by Laura at 7:10 PM