A week and a why 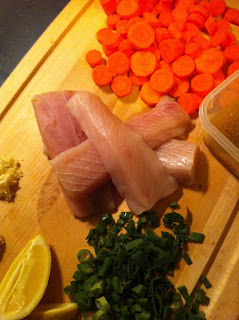 This is the panicked question that I get most often when I tell people that I'm no longer eating grains. After the panic, I usually get a series of questions about exactly which ingredients I'm eliminating. Rice? Yes. Corn?? Yes. BREAD?!?! Yes. Then, the eye roll and the shoulder shrug.

The overall attitude is usually that this is just another fad diet and I'm its latest victim. The truth is, the grain-free lifestyle has been around since long before Atkins and South Beach repackaged and marketed it. In its purest form, it is a modern reproduction of the diet that cavemen followed. Grains as a diet staple are actually a relatively new idea. Science tells us that life expectancy and overall health actually decreased when we stopped hunting and gathering and started homesteading.

But enough propoganda. The question I also get is, "Why?" The quick answer: I'm fat and I want to finally stop being fat. The longer answer: I've had Polycystic Ovarian Syndrome since I was a teenager and the research says that the syndrome has the awful catch-22 of being reversed through weight loss while also making weight loss very difficult. It ties into blood sugar issues which can be leveled out with a grain-free diet. I also had gall bladder issues before pregnancy which were exacerbated by my last-minute c-section. The grain-free diet has been a way for other ladies in my situation to avoid gall bladder removal.

One thing about this decision is that it takes a lot of planning each week since I make pretty much every meal for us. I'm hoping to post the week's dinners each monday. (Lunches are usually leftovers from the night before.) Some nights I might just cook a piece of meat and throw it on a gigantic salad. I also try to pre-make breakfast foods for us, and if I do that, I'll post it as well.

A couple reminders - we are eating dairy and some tree nuts, we cook primarily with coconut and olive oils but don't require that they be absolute virgin pressings, and while we've cut out most soy I need my soy sauce.

Breakfast for the week - slices of breakfast casserole.

This post is part of Menu Plan Monday and Monday Mania.