And the work travel continues.

I did Boston for a couple days - which included a semi-private tour of Fenway for a work event and a delicious lunch at my favorite Beacon Hill Hotel.

After Boston, I spent almost a week in Los Angeles. It was my first introduction to how pregnancy can really take a toll on your stamina when traveling cross country and running to an average of five meetings each day. One meeting was a very late, but deliciously decadent, dinner at the new and outrageously too-hip-for-the-likes-of-me Red O Restaurant in West Hollywood. The paparazzi outside was sort of a guilty treat, as was the spotting of Top Chef regular Hubert Keller, who was on his way out of dinner as I was heading in. Oh and yes, there was good food, too. Traditional Mexican flavors with rich meats and just-right portions made it clear that even tacos can be gourmet. The next day, I managed to get up for an early breakfast meeting (and another awesome lunch at Elements Kitchen in Pasadena) but crashed as soon as my meetings were over at 4 pm. I wandered over to a Wolfgang Puck Bistro by my hotel for dinner, figuring that it wasn't going to be fancy but that it would at least provide better nutrition options than the nearby Carl's Jr. I was disappointed by the caesar salad (who just throws a few full leaves of romaine in a to-go container and calls it a salad?) but the spaghetti bolognese more than made up for it. I fell asleep at 6:45 PST with a belly full of spaghetti and a world series game on the TV and didn't wake up until morning.

I am currently in Chicago on a half-fun-half-work trip. The husband is a U of C graduate, so we are both here for the weekend to see college friends from both of our undergrads. It's been quite a food weekend, so I'll give the highlights...

So yes, we've eaten well, albeit in a vacuum void of nutritional value. We had to miss this week's CSA share for the trip, and I'm becoming increasingly guilt-ridden about our CSA slacker-ness as of late. But next week is the last week for this particular CSA, and in a month or so, we will start the Winter CSA at a place much closer to home, so the cooking adventures should start up again, soon. The husband flies out tomorrow, but I'm here for another three days for work, so I will try to follow up with any ensuing foodie braggery. I'll leave you, though, with the best picture of the weekend...our friend Rudy's reaction to our Hot Doug's haul... 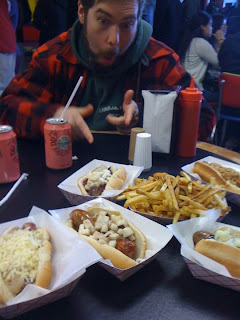