A grain free dinner without even trying 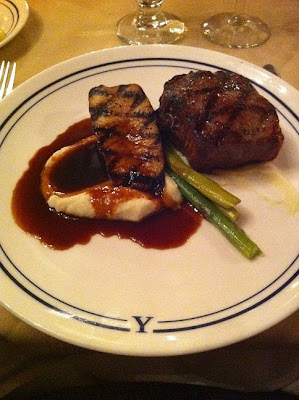 So here I am at Yale University, attending a yearly conference for people in my profession who work at Ivy League schools. (Yes, I do make a snooty chortle noise every time I type that. We also say "chin chin" and wear ascots for the entire conference.)

Anyway, when I registered for the conference they did ask if I had any dietary restrictions so I put down gluten-free in the hopes that I'd at least get meals that had a good amount of protein and veg even if I had to pick around something that had grain. It ends up I didn't even have to worry about it for the kick-off dinner tonight because most of the passed hors d'oeuvres and the entire dinner menu were grain-free!

The theme of this year's conference is going green, so the added bonus of tonight's dinner was that it was locally sourced. The most amazing part was that it was prepared and served by Yale's internal catering service. I did sidle up to the catering manager and ask her to see if any of the components of the appetizers or dinner dishes contained grains or sugars. There was a minimal amount of sugar added to the vinaigrette on the salad and the demi-glaze in the main course, but otherwise I was totally in the clear.

I savored every bite of the menu below while listening to a very interesting talk by the Yale professor who oversees the Yale Project on Climate Control Communication. He spoke about his work in studying how we can effectively educate the public on global warming and how the message needs to change depending on the person's current thoughts on the subject. I skipped the after-party to the dinner, which was "flower power" themed and had a huge, sugar-laden dessert bar. I'd like to say that I did that so I could come back and write this post for all of you, but really it was so that I could get a full night's sleep for the first time in, like, forever. 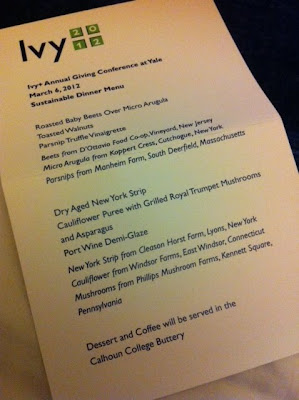 This post is part of Slightly Indulgent Tuesday
Posted by Laura at 7:35 PM